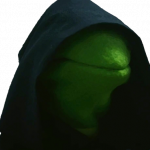 By Gork W. Bush, June 14 in The Suggestions Box