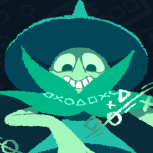 By Falarson, September 19, 2021 in The Suggestions Box